The class I've been teaching this fall at the New School, News Automata, didn't require any previous programming experience, so I wanted to find a way to teach my students some basics. I had a plan where I'd get them setup and rolling with the basics and then transition into a journalism-related program involving some text processing libraries.

But when it came time to teach the class, almost the entire two hours were spent setting up the students' development environments. We were working in a school computer lab so students didn't have access to the permissions they might need to install packages and what not. I figured out a decent workaround, but even then, if you aren't already familiar with this stuff, environment configuration is super tedious and frustrating. It's often that way even if you are already familiar with this stuff.

Later, we tried again: this time students brought in their own computers. But of course, everyone had different systems - OSX, Windows, ChromeOS...and I realized that all the tools which make env setup easier (package managers and so on) require their own setup which just complicated things even further. And the packages I wanted to get the students using involved some lower-level libraries, such as numpy and scipy, required compiling which could take ages depending on what hardware the student had. By the time most of the students had their environment setup, everyone was exhausted and dispirited. What a mess.

So to make this all a bit easier, I put together a system which allows students to share a remote development environment. All I had to do was setup the environment once on my own server, and then students could submit code to it through a web interface. As long as the student had a browser, they could write their scripts. It was a huge, huge time saver - everyone could dive right into playing with some code.

I cleaned up the project and turned it into a package to reuse: Pasture. Now you can install it like you would any pypi package and build something on top of it.

I've included an example from the class I was teaching. I had students try their hand at writing some simple newsfeed filtering algorithms. Building on top of Pasture, students could submit a script which included a filtering function and see a newsfeed filtered in real(-ish) time: 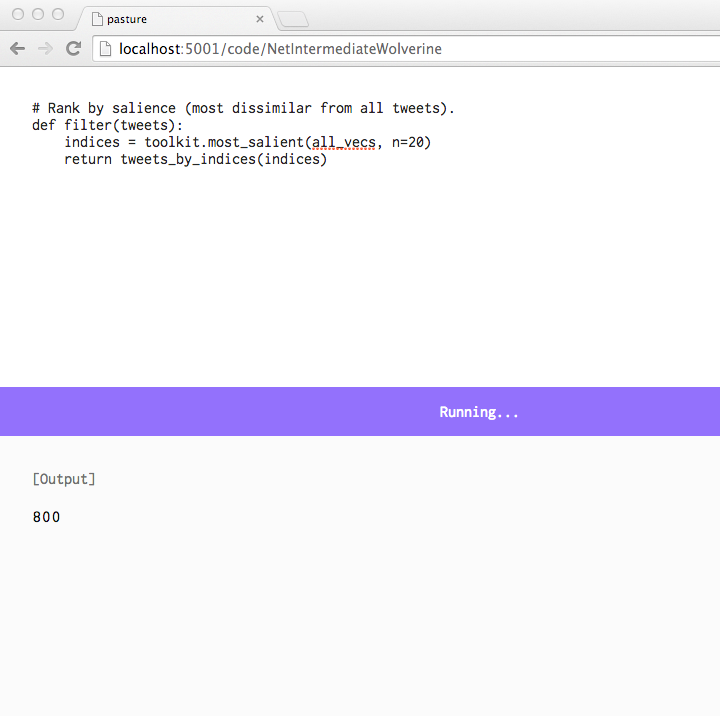 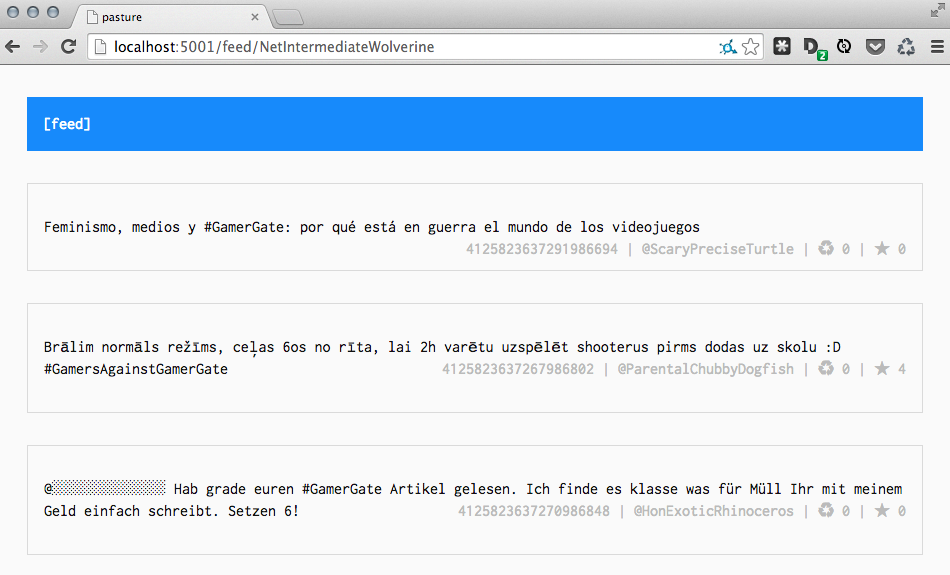 Check out the GitHub repo for usage instructions and the full example.